Years before Gloria Swanson declared she was ready for her close-up and took the long walk down that storied staircase on Sunset Boulevard, she sat for another close-up with the legendary photographer Edward Steichen, and created the indelible image above.

It’s an image which embodies something essential about our relationship with screen goddesses. The combination of her direct gaze, mediated by the presence of a veil, captures the pull-push dynamic of the Hollywood glamour shot at its zenith. “Come here, this is all for you, just for you, EXCEPT — don’t touch! Merely watch. Keep your distance. Get too close and you might end up like William Holden — face down in my swimming-pool.”

The other day I was strolling with my 16 year-old daughter through the Los Angeles County Museum of Art (which, funnily enough, we had reached by driving down Sunset Boulevard), when we found ourselves confronted with the arresting image of Gloria Swanson in her prime.  We were in an obscure corner of the American galleries and had stumbled upon a treasure trove of Edward Steichen’s work, some of it less well-known.

It was a newly endowed collection of Steichen’s photos, focusing mainly on Hollywood stars and some choice photos from the pages of Vogue and Vanity Fair. It’s fair to say that during his years working for Conde Nast, Steichen more or less invented glamour photography and the high toned advertising money-shot. “Steichen was a perfectionist,” says Howard Schatz, a fashion photographer whose portraits of actors appear in Vanity Fair. “His precise eye for lighting and design makes his pictures from the ’20s and ’30s, though clearly of their time, still much admired by fashion photographers today.”

Steichen is the photographer by whom all others must be judged.  His photos feel as if they are alive, and his portraits – drawing on his background as an accomplished painter – use light and shade to draw out the inner life of his subjects like an old master.  Indeed, walking past a Sargent and a Rembrandt later in our perambulations we did not find Steichen wanting in the comparison.

In fact, in this early self-portrait which opens the exhibit, you can see how Steichen has physically manipulated the emulsion to bring a mysterious, painterly quality to the image. It’s as if the subject of the self-portrait wants to hide within the image. 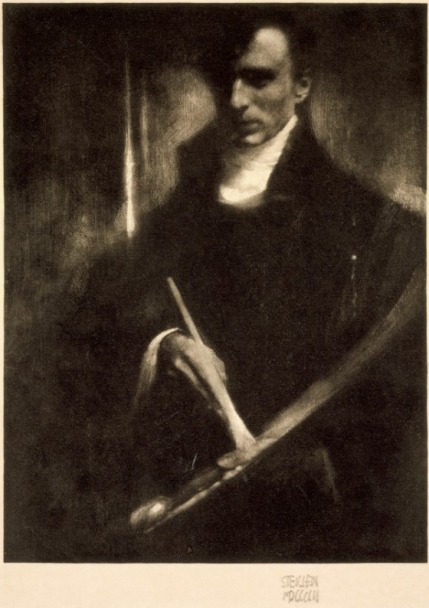 Contrast this with his famous self-portrait of later years which is all about the virtues of modern photography: clarity and candor in the pose and lighting.  Yet there is a mysterious force in those eyes, a power that draws the viewer in. “See what I see” they temptingly offer, “if you dare.”

Looking at the photos of Hollywood celebrities, it was striking how Steichen had managed to reveal some of the more hidden corners of his subjects’ personalities, and in the process modify the way we view them.

Lillian Gish’s poise, confidence, and a beauty more profound than that habitually revealed by the moving camera in her films….

Clara Bow’s sadness and even loneliness – all the flap of the “It” girl lost in a gaze to a horizon she can no longer see….

Garbo’s abiding discomfort within her own skin….

Loretta Young, stranded at the top of a staircase, seems lost and imprisoned at the same time….

This photo of Walt Disney (not in the exhibit, but I just had to include it) is prescient in its placing of Mickey and Minnie in the power position. Walt looks like a man trying to shake off a pair of gremlins whose malevolence has been manifested in oversized ears. “Yes” he seems to say of his teenage offspring,”I know they’re mine, but you can’t hold me responsible for everything they get up to!”

Again not in the exhibit is this portrait of legendary interpretive dancer, Isadora Duncan. The setting perfectly mirrors her absorption in classical notions of dance…. 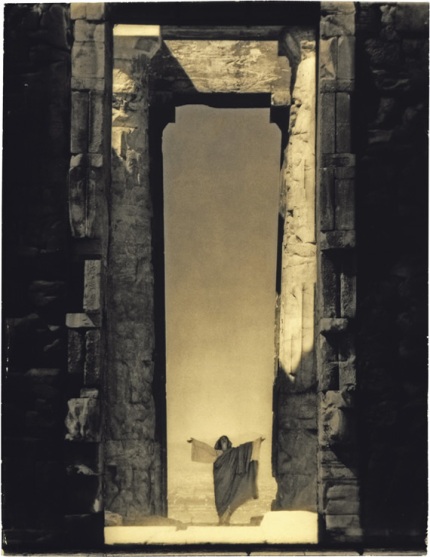 The exhibit is rounded out by some non-celebrity photos, providing a resonance that seems to then inform how one looks at the more famous portraits. (Unfortunately I could not find online samples of Steichen’s early “product placement” advertising shots). 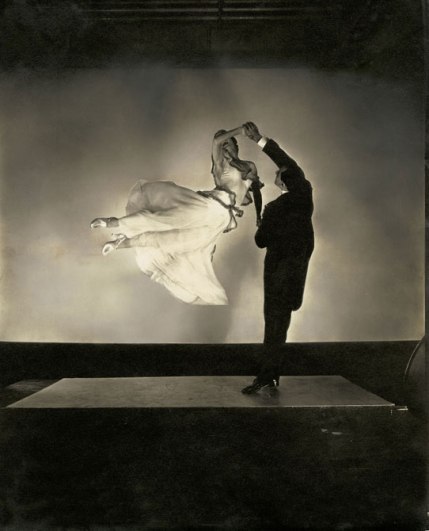 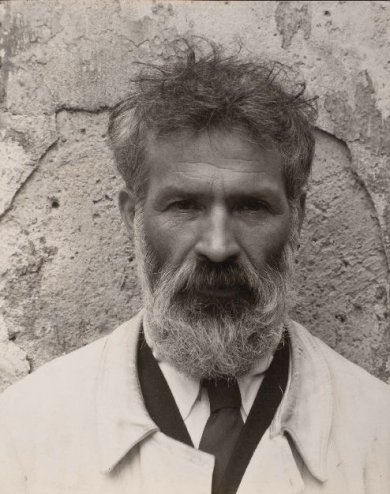 My daughter declared the following her favorite. I am inclined to agree. Steichen has caught a sublime moment of connection between a couple. Completely wrapped up in each other, they see not the world around them. But for the prescience of the lurking photographer, we easily might not have seen them either.

Steichen in 1955 assembling an exhibition of photos for New York’s Museum of Modern Art.

Photography records the gamut of feelings written on the human face, the beauty of the earth and skies that man has inherited, and the wealth and confusion man has created. It is a major force in explaining man to man. 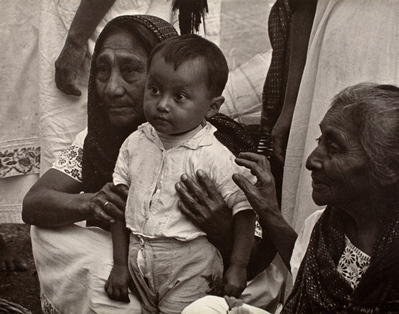