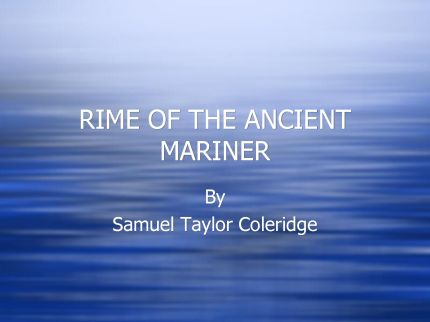 Directed and Produced by Mark Ward for WBUR-FM and NPR Playhouse.

(If the player fails to load, you can follow this link, from which you can also DOWNLOAD the program).

You can read about the making of this dramatization here.

The following are selected illustrations by Gustav Doré from the 1876 edition, with one illustration by Mervyn Peake. 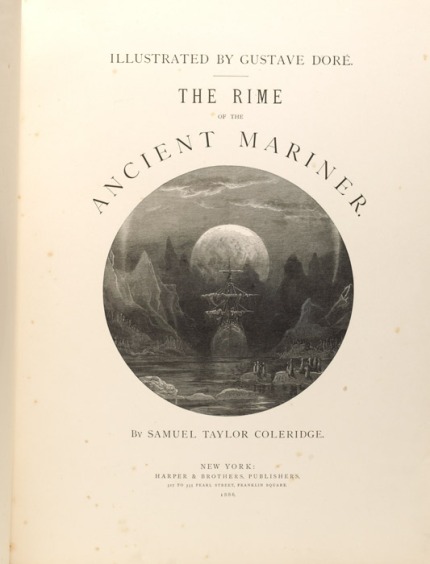 It is an ancient Mariner,
And he stoppeth one of three. 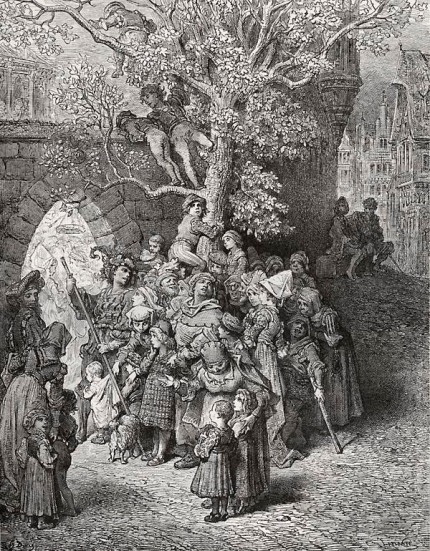 ‘The guests are met, the feast is set:
May’st hear the merry din.’ 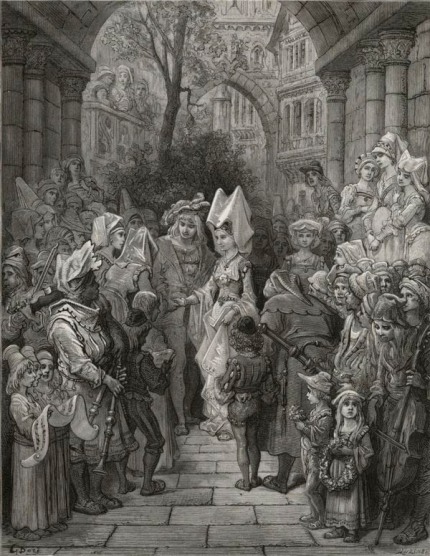 The bride hath paced into the hall…. 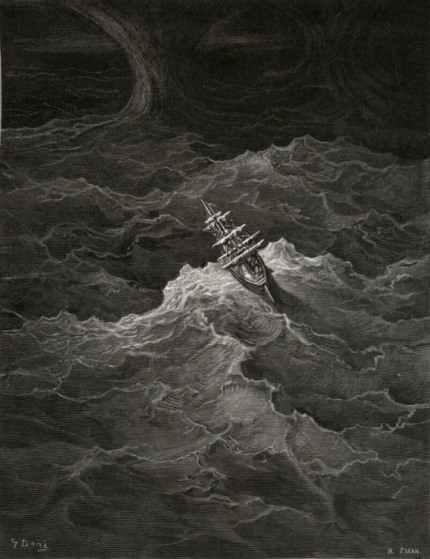 And now the STORM-BLAST came, and he
Was tyrannous and strong:
He struck with his o’ertaking wings,
And chased us south along. 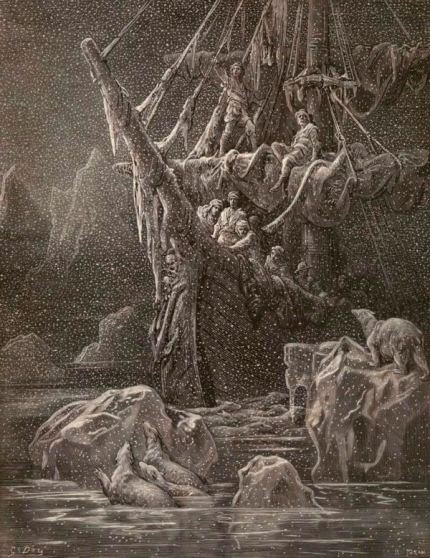 And now there came both mist and snow,
And it grew wondrous cold:
And ice, mast-high, came floating by,
As green as emerald. 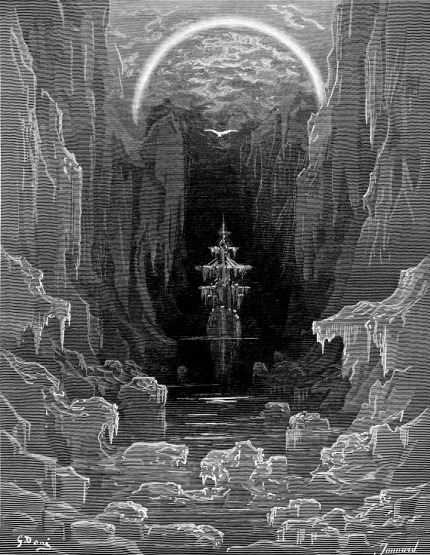 The ice was here, the ice was there,
The ice was all around:
It cracked and growled, and roared and howled,
Like noises in a swound! 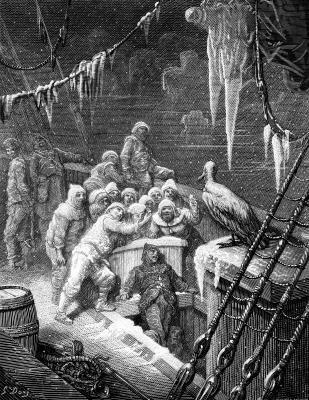 And a good south wind sprung up behind;
The Albatross did follow,
And every day, for food or play,
Came to the mariner’s hollo! 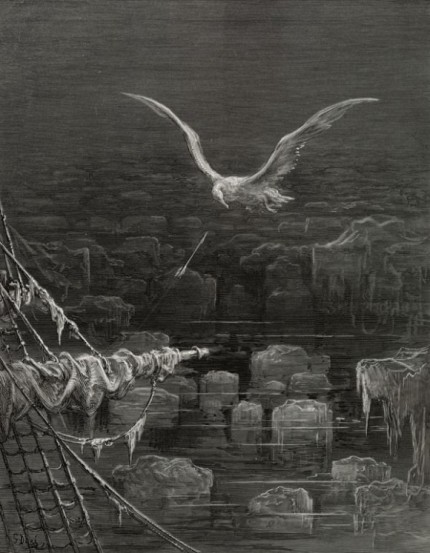 With my cross-bow
I shot the albatross. 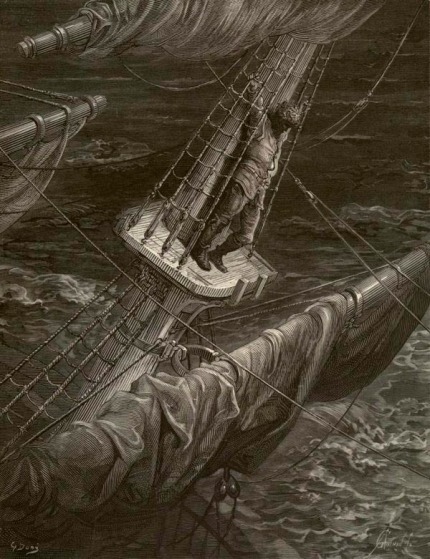 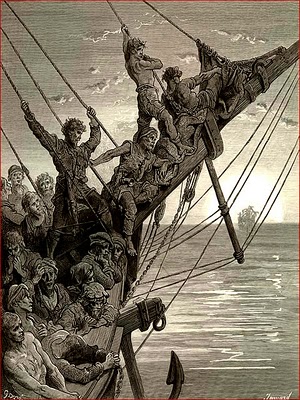 We were the first that ever burst
Into that silent sea. 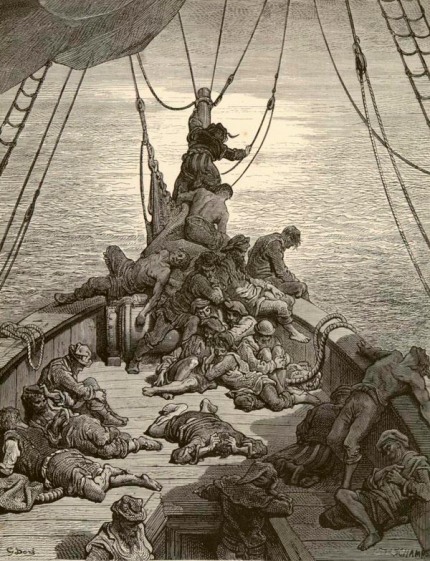 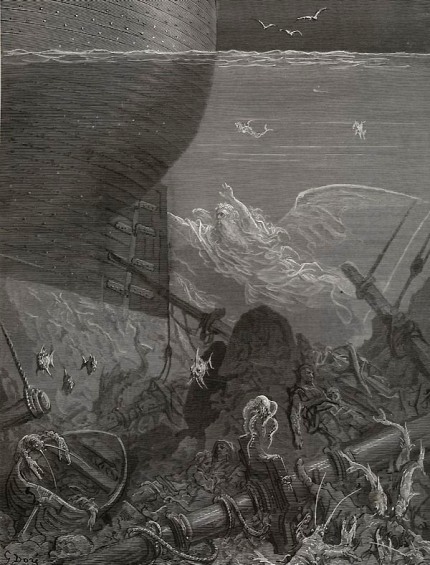 And some in dreams assurèd were
Of the Spirit that plagued us so;
Nine fathom deep he had followed us
From the land of mist and snow. 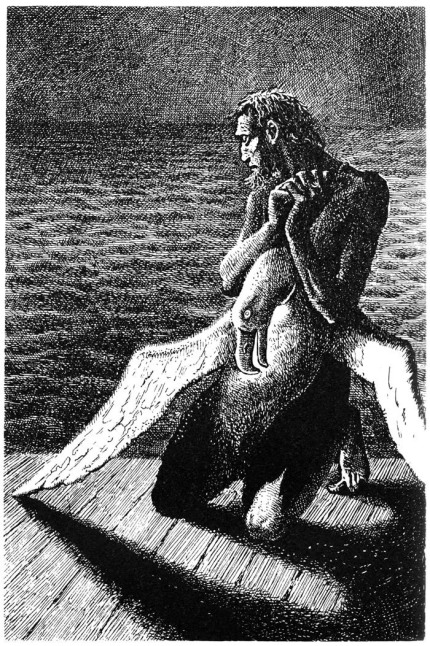 Instead of the cross, the Albatross
About my neck was hung.
(Drawing by Mervyn Peake) 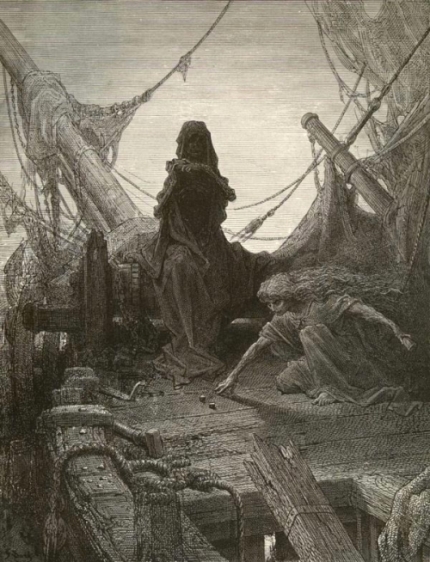 The naked hulk alongside came,
And the twain were casting dice;
‘The game is done! I’ve won! I’ve won!’
Quoth she, and whistles thrice. 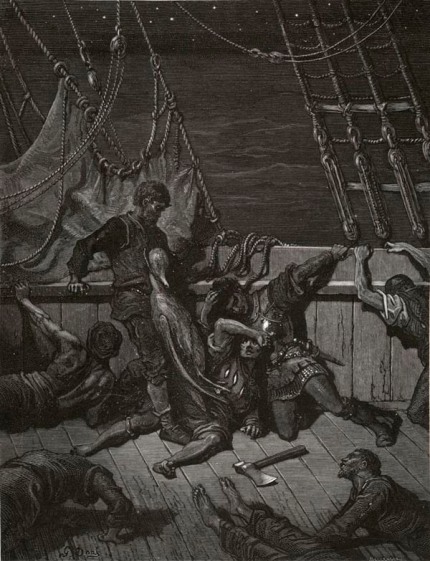 One after one, by the star-dogged Moon,
Too quick for groan or sigh,
Each turned his face with a ghastly pang,
And cursed me with his eye.
Four times fifty living men,
(And I heard nor sigh nor groan)
With heavy thump, a lifeless lump,
They dropped down one by one. 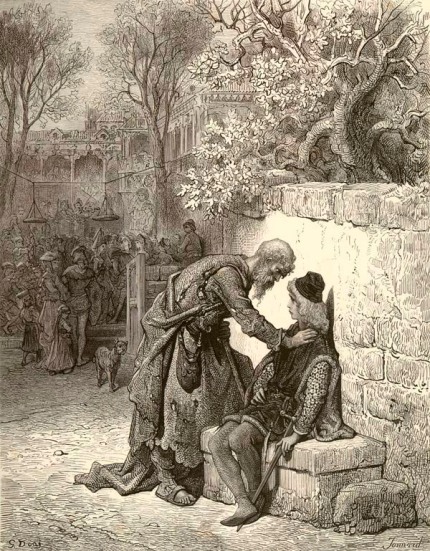 ‘I fear thee, ancient Mariner!
I fear thy skinny hand!
And thou art long, and lank, and brown,
As is the ribbed sea-sand.’ 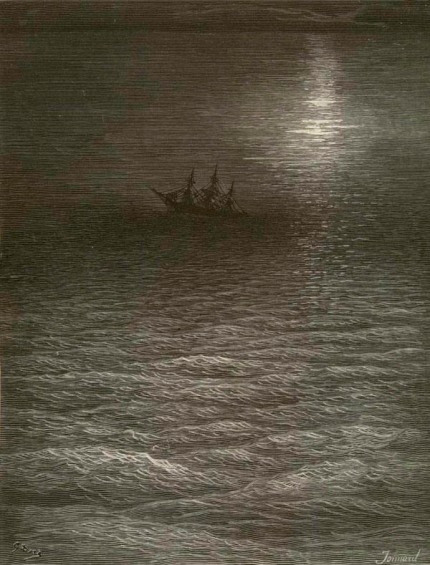 The moving Moon went up the sky,
And no where did abide:
Softly she was going up,
And a star or two beside— 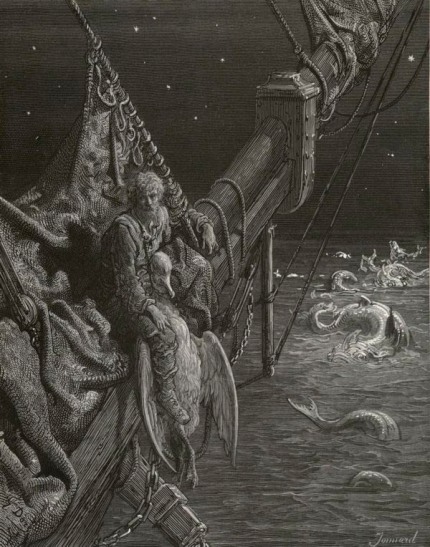 Beyond the shadow of the ship,
I watched the water-snakes:
They moved in tracks of shining white,
And when they reared, the elfish light
Fell off in hoary flakes. 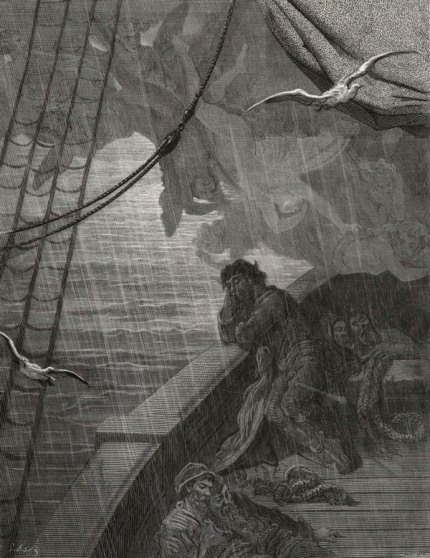 And the coming wind did roar more loud,
And the sails did sigh like sedge,
And the rain poured down from one black cloud;
The Moon was at its edge. 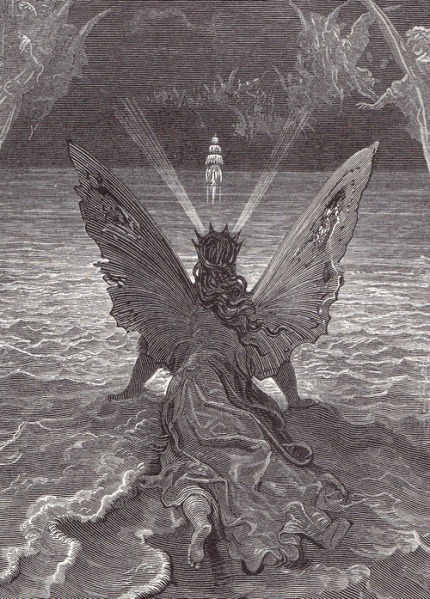 Around, around, flew each sweet sound,
Then darted to the Sun;
Slowly the sounds came back again,
Now mixed, now one by one. 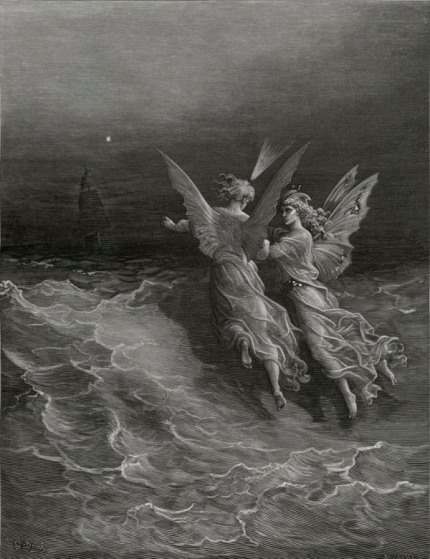 How long in that same fit I lay,
I have not to declare;
But ere my living life returned,
I heard and in my soul discerned
Two voices in the air. 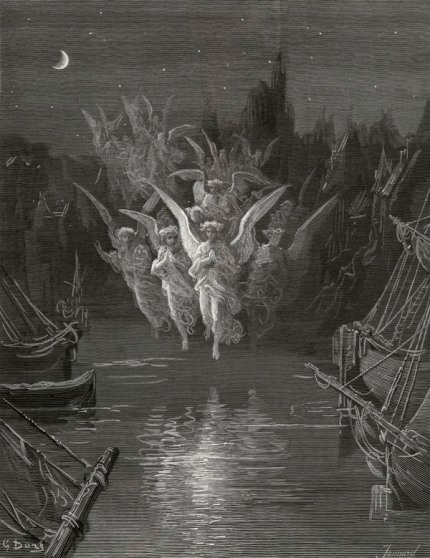 A little distance from the prow
Those crimson shadows were:
I turned my eyes upon the deck—
Oh, Christ! what saw I there! 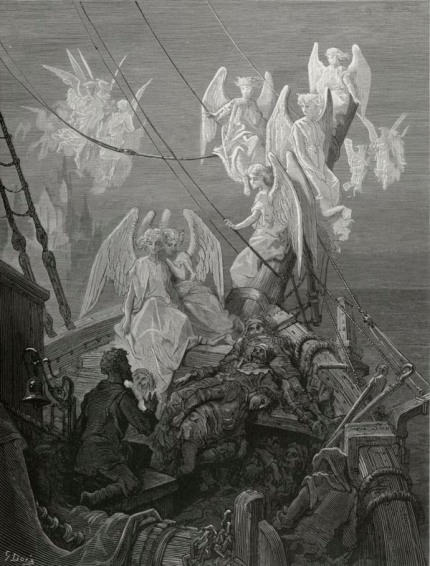 Each corse lay flat, lifeless and flat,
And, by the holy rood!
A man all light, a seraph-man,
On every corse there stood. 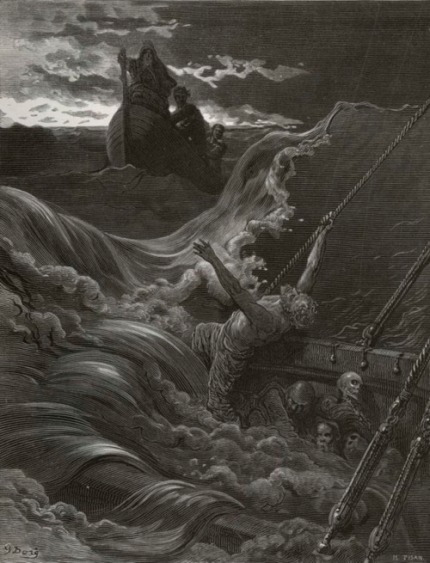 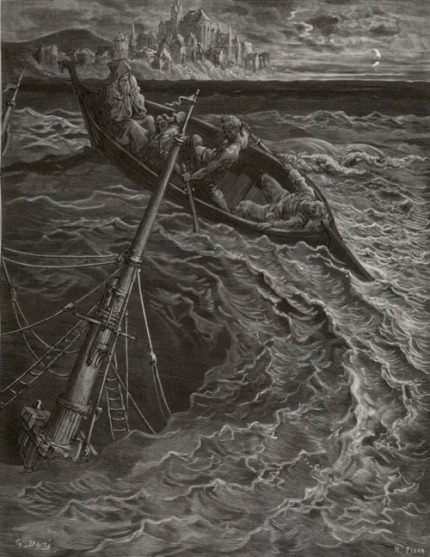 Under the water it rumbled on,
Still louder and more dread:
It reached the ship, it split the bay;
The ship went down like lead. 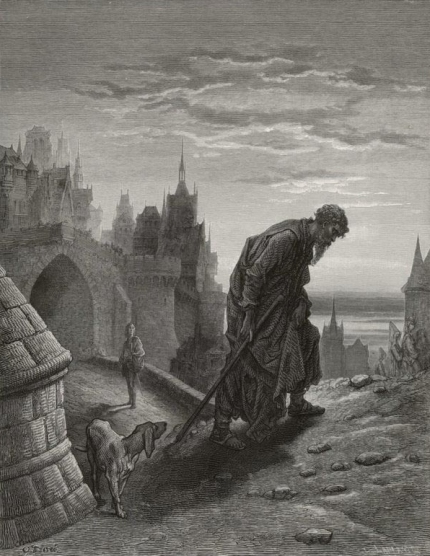 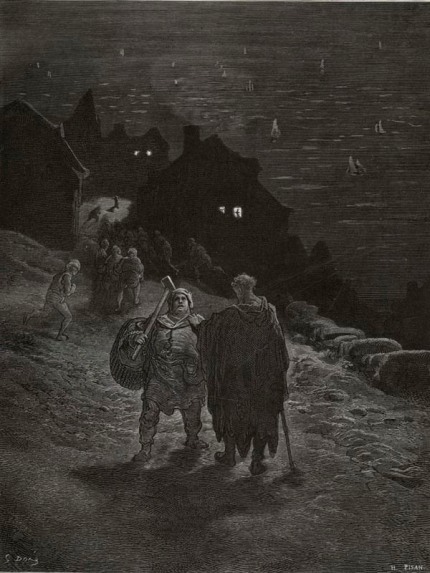 I have strange power of speech;
That moment that his face I see,
I know the man that must hear me:
To him my tale I teach. 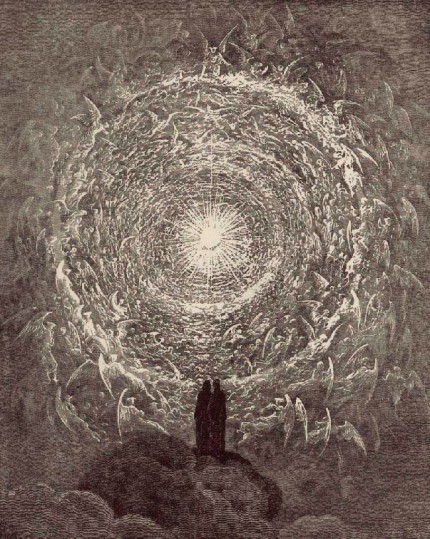 He prayeth best, who loveth best
All things both great and small;
For the dear God who loveth us,
He made and loveth all.