Long before he provided the ominous tones for Darth Vader and created the most iconic-sounding villain in screen history, James Earl Jones made his mark in a number of major productions of stage and screen. It was his role in Jean Genet’s groundbreaking play The Blacks, first staged in New York in 1961, and running for a record-breaking 1408 performances, that led to one of his most memorable early film experiences.

James Earl Jones and Cicely Tyson in The Blacks

Polish poster for The Comedians

Peter Glenville, a leading British director of the time who had closely collaborated with Graham Greene and Tennessee Williams, was looking for a number of black actors to take roles in his forthcoming film of Greene’s The Comedians, set amidst the turmoil of ‘Papa Doc’ Duvalier’s Haiti.  Going to The Blacks, which was one of the top off-Broadway hits of the decade, Glenville was presented with an embarrassment of acting riches.  Jones was not the only one to be cast in the film as a result of his performance in the play: joining him were Cicely Tyson, Zakes Mokae, and Roscoe Lee Brown.  Also in the film was a young Gloria Foster, who later made a mark as the Oracle in the first two Matrix pictures.

For Jones, working on The Comedians was memorable both on, and off, screen. For rarely can a young actor have found himself spending time with such a luminous A-list cast: Elizabeth Taylor, Richard Burton, Alec Guinness, Peter Ustinov, not to mention the legendary star of silent pictures, Lillian Gish.

Peter Glenville (c., standing) with the cast of The Comedians

A few years ago I produced an oral history of the life and work of Peter Glenville, and James Earl Jones kindly agreed to share his reminiscences with Susan Loewenberg, Producing Director of L.A. TheatreWorks, who commissioned the history on behalf of the Peter Glenville Foundation.

The segment about The Comedians was my favorite, enlivened by Jones’s commentary, his extraordinary presence, and that voice. (In a technical sidebar, that voice was so resonant with bass frequencies that the engineer had quite some trouble recording it without distortion).

Now you can enjoy his story too…… 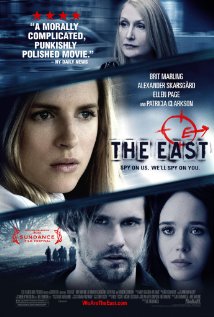 There is a long and noble line of movies depicting an ever-inward, ever-outward spiraling corruption that threatens to engulf all who wander into its lethal coils.  Outstanding examples include the great Alan J. Pakula’s “The Parallax View” and “All the President’s Men”, Sidney Lumet’s “Prince of the City”, and Francesco Rosi’s “Illustrious Corpses”.

The jokey version of the genre includes the hilarious “The President’s Analyst”, in which the uber-villain turns out to be a sub-S.P.E.C.T.R.E version of Ma Bell (that’s AT&T to you).  Of course in 1967 the notion that a phone company had designs on world domination was inherently ridiculous.  Who knew?! 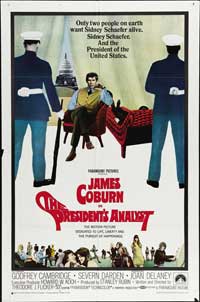 Into this tradition slips “The East”, and it reinvigorates the familiar tropes by plunging head-first into the polluted waters of today’s corporate industrial and capitalist complex – waters that are here polluted literally, figuratively and, above all, morally.  The East is a home-grown cell of eco terrorists, carrying out a series of high-concept “jams” against companies whose products and by-products are maiming and killing us.  Sarah (Brit Marling in a finely shaded and riveting performance) is sent undercover to bring them down — not by the FBI, but by a shadowy private intelligence firm every bit as ethically compromised as the companies it is protecting.  This is a nice twist – the film posits that the real power in the land lies not with the government,  but with the corporations it is supposed to regulate.  Regulate be damned! 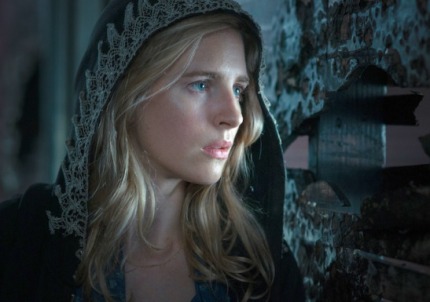 Of course, Sarah finds her own internal compass – emotional, spiritual, and ethical – seriously tested as she starts to see the virtue of The East’s case.  It also doesn’t hurt that the terrorist’s leader is a low-key, charismatic John the Baptist/Jesus-figure (complete with requisite hippie hairdo, facial hair and hair-shirts) played by the excellent Alexander Skarsgârd, with a fondness for pulling total-immersion baptisms on his eau naturel disciples.  No prizes for guessing who turns, and who turns out to be his Mary Magdalen, picking up where he leaves off. 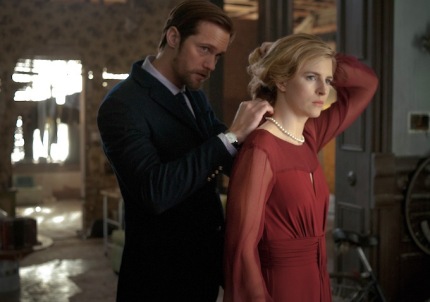 It’s always a treat to see a movie without knowing anything about it beforehand, which was the case when I stumbled into an advanced screening of “The East”.  With no preconceived notions, a film really has to stand on its own two feet from frame one.  “The East” not only does this handsomely, but also rolls up its sleeves and digs deep into the moral morass of its subject-matter.

At the Q. and A. afterwards, the articulate film-makers talked about how they were inspired by their sense that the system is completely broken, and their experiences living on the road with those the system labels as drop-outs.  Their film deftly avoids Hollywood cliché as it forces the viewer to confront the possibility that these so-called anarchists, terrorists of the status quo, might have a point.  This tense examination of moral, and immoral, equivalency in modern America is at its most potent in the scene where the most passionate of the group, played by Ellen Page, confronts her estranged CEO father, forcing him to take a bathe in the polluted creek he has created to serve the Mammon god of profitable fossil-fuel independence at any price.

Co-writers Brit Marlin and director Zai Batmanglij (who also directs “The East” with the steady hand of a veteran) made a stir at Sundance with their debut feature, “Sound of My Voice”.  “The East” has the backing of Scott Free, the production company of Ridley and Tony Scott, which is quietly putting its money behind a slew of excellent TV and features with adult, often political, subject matter; as the film-makers said last night, the boomers are the original radicals (at least the ones who haven’t got us into the knotty mess that The East is trying to detonate rather than untangle).  A ripple of solidarity swept through the boomer-heavy audience.

But “The East” belongs primarily to the generation of 20 and 30-somethings who are going to have to find a way to change the system before it changes us, and our planet, irrevocably – and not for the better.  Its distributor, Fox Searchlight, cannily understands this, and is rolling the film out in a campaign of campus screenings before it hits theatres at the end of the month.  I hope “The East” finds the wide audience it deserves.  It is a far superior foray into these tricky thematic waters than Gus van Sant’s “Promised Land” earlier this year, which never could quite figure out which story it was telling. It’s a powerful and welcome reminder that bringing political engagement, idealism and intelligence to a film does not preclude the possibility of a taut, entertaining thriller, and good box office to boot.

Here is the most recent trailer: